On April 7, 2022, Gulnoz Mamarasulova, Director of the Representative Office of the Association Central Asia in Uzbekistan, met with Feruza Eshmatova, Ombudsman of the Oliy Majlis of the Republic of Uzbekistan.

At the beginning of the conversation, information was provided on the goals and objectives of the Representative Office and its main activities in Uzbekistan. The meeting also discussed the workshops of the the Representative Office in November-December 2021 with independent journalists, human rights activists, bloggers and civil society activists in all regions of Uzbekistan and its main conclusions. It was noted that currently there are 17 members of the National Council for Independent Civil Society in different regions.

During the conversation, Ombudsman F. Eshmatova informed about the activities of the Ombudsman Institute and the reforms implemented in recent years to ensure human rights.

Monitoring visits to closed institutions with restricted freedom of movement by public groups under the National Preventive Mechanism for the Prevention of Torture under the Ombudsman, with the participation of civil society institutions and the media, were highlighted. Information was provided on the work being done to prevent torture.

At the end of the talks, the sides discussed future plans and issues of bilateral cooperation. 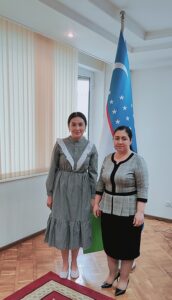